Every dish has an origin and oftentimes the stories are fascinating and even deep-rooted. Not everyone will know the story behind sushi or the subtle mysteries about the dish that keeps people guessing. Some of these mysteries are no cause for concern, but others may be intriguing or even surprising. Whatever they are, the hope is that none will stop you from eating the food you love. Check out these facts about sushi, and nigiri, that you should know as a sushi lover.

1. It’s Likely That Your Wasabi is Not the Real Thing

American sushi lovers, you may be disappointed to find out that the wasabi that your American sushi restaurants serve is not ‘true’ wasabi, but a blend of horseradish and mustard, to which green food coloring is added. Finding the real Wasabia Japonica plant outside of Japan is a rarity, considering that it’s even difficult to come by in Japan itself. It’s hard to grow and challenging to handle. Real wasabi is derived from the stem of the wasabi plant, which can grow to almost two feet long, and compared to the fake wasabi, is more complex, delicate and sweeter.

Contrary to what many people think, one of the facts about sushi is that it is a Chinese creation and not a Japanese creation. Sushi was first referenced in china in the second century A.D, but it is believed that it was during the 8th century A.D that sushi made its way to Japan. It was originally used by the Chinese as a method to preserve food fish in marinated rice. The Japanese are credited with making the first complete sushi, eating rice along with fish. Sushi became a vital source of protein for the Japanese people. 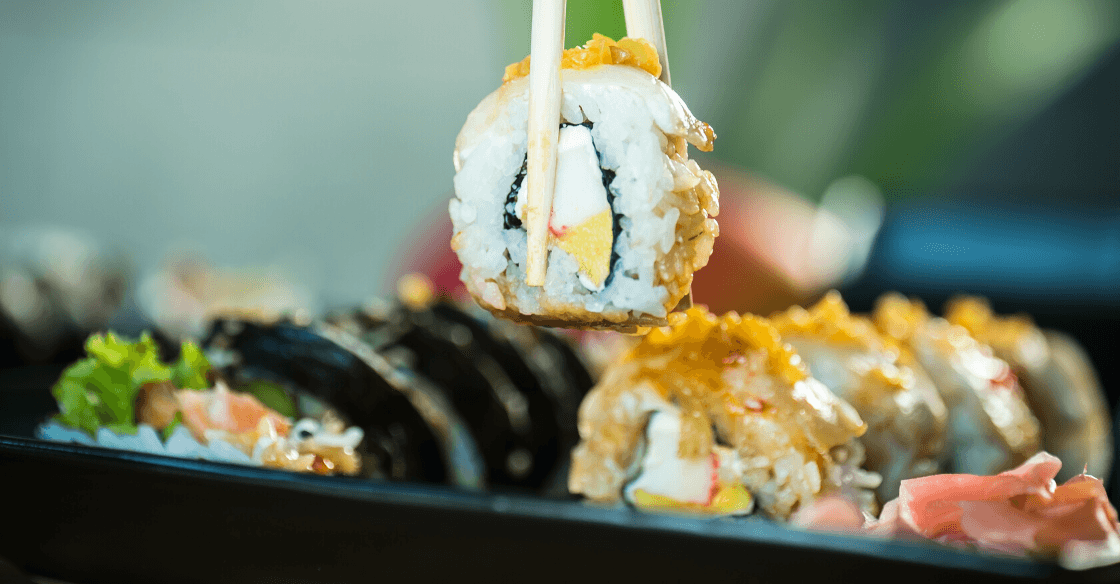 3. First, it was Fingers, Then Chopsticks

You may be wondering how and what to eat your sushi with. While many opt for chopsticks, not everyone is comfortable using them, or even know how to. Take a breath because it is perfectly fine to eat sushi with your fingers. You’d be doing it the traditional way. In fact, fingers were the original tool used to eat sushi. Early chopsticks were primarily used for cooking, and it was A.D. 400 before people began eating chopsticks as utensils.

4. Sushi was Regarded as “Fast-food”

Sushi, whether nigiri or a traditional roll, seems like such a delicate food, and as such, visualizing it being treated as a fast-food option doesn’t seem so appealing. However, during the early 19th century, sushi was an early Japanese “take out” food. It was served from sushi stalls mounted on the streets and was treated as a snack or quick bite option. World War II saw an end to the stalls in an effort to improve sanitation. Its fast-food status changed, and sushi became a dining experience, and an art form worthy of upscale recognition.

Some folks avoid sushi because they perceive it to be a dish that is always served raw, with all raw ingredients. However, that is not the case. While it is a dish served mainly cold, today’s sushi is served with a variety of cooked additions, such as smoked salmon, steamed clams, grilled squid and fried shrimp. If you squirm at raw fish, know that you can still enjoy sushi without eating a raw piece of salmon.

Like all foods, sushi has its mysteries that some people would like to learn about. Maybe you’ll rest easy if you have the answer to a sushi question that you’ve been pondering. Hopefully, these facts about sushi will only make you want to indulge more. Come see us at RB Sushi and enjoy your sushi dining experience with all the real ingredients.

The Good Vs. The Great: What Characteristics Make Sushi “High-Quality”?